UKRSA ‘Around the World’ Pattern

The ‘Around the world’ (ATW) pattern is a particular method of one-piece stringing used with tennis and squash rackets, where the main strings would naturally finish at the throat and conventional one-piece stringing would necessitate starting the crosses at the bottom. The ATW method ensures the crosses are installed from the top of the frame, as is often required under the racket manufacturer’s warranty, thereby protecting the frame from distortion during the stringing process.

There are numerous variations of the ATW method that have been developed over the years, some more complex than others. The UK Racket Stringers Association (UKRSA) has developed a signature ATW pattern that is both simple to use and incredibly effective. The UKRSA method is explained below, using a Tecnifibre Carboflex 125 Heritage squash racket as an example. The method can be done with a standard set of stringing tools but is easiest with 2 starting clamps.

The racket used in this example has a total of 14 mains and 18 crosses. In the steps that follow, shorthand notation is applied; the mains on each side of the racket are numbered 1 to 7 starting from the centre, with the prefix LM/RM referring to left or right main. 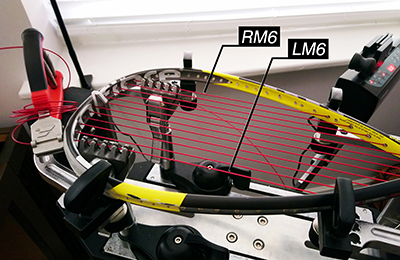 String the mains as normal, but omit the outer main on each side (Step 3) 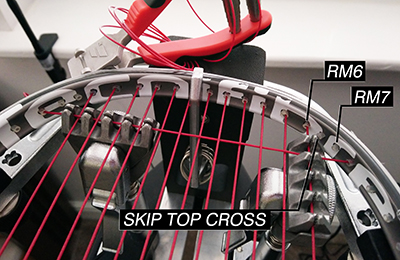 Start stringing the crosses, making sure to miss the first cross (Step 4) 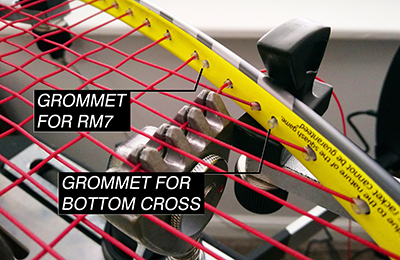 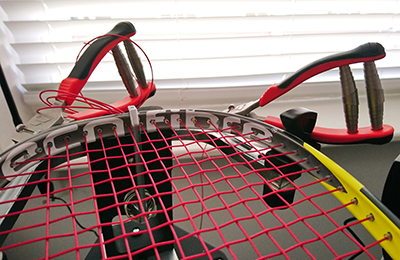 At this point, LM6 and RM7 are held at the head with starting clamps (Step 6) 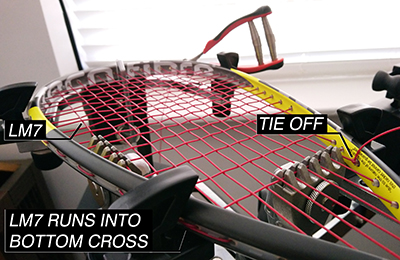 Install the bottom cross and tie off (Step 8) 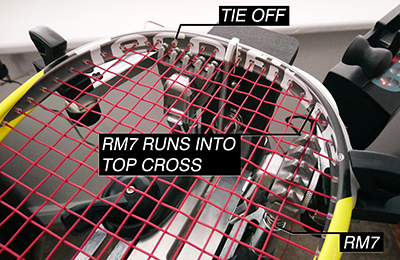 Install the top cross and tie off (Step 9)

Aesthetics often dictate the exact specifications of an ATW pattern. In general, the aim is to use a pattern that makes the runs on the outside of the frame as short as possible. This often requires some planning to decide how you will proceed in order to have best results. With the UKRSA pattern, before starting the mains it is necessary to determine the number of crosses to be done with the short side string. Generally, this is either 1, 2 or 3 crosses, but changes between different racket models and grommet configurations. However, there are some rules that can always be followed:

The above are dependent on the following additional rules:

There are many versions of the ATW pattern, most of which are either flawed, unnecessarily complicated or not very effective. The most common reason for the poor quality is the pattern's failure to get the same dynamic tension on corresponding mains, which is essential for uniform string bed tension. The advantage of the UKRSA pattern is that both outer mains are tensioned through the same number of crosses, so have the same dynamic tension. Both outer mains also run into a cross, rather than immediately into a knot, meaning they are unlikely to lose tension from tying-off.

Some ATW variations require installing the bottom cross early on, before the other crosses are installed. These patterns are often referred to as ‘box’ patterns. The Wilson ATW pattern, for example, involves tying-off the second to last main on the short side at the top. The outer long side main is strung as normal, finishing at the throat, which then puts in the bottom cross at the throat and continues with the missing main on the short side. The rest of the crosses are then strung from the top down.

The disadvantage of these box patterns is that the top and bottom crosses are weaved out of order, making it easy to misweave. Rather than having alternating weaves across the whole string bed, it is possible to end up with a repeated weave at the throat if the crosses are not carefully counted. With the UKRSA pattern, this problem is avoided as the short side main does not finish off the bottom crosses until everything else is completed. This also avoids a ‘hard’ weave for the second to last cross (where cross strings are already tensioned above and below), which helps to alleviate friction burns and notching.