Spaghetti Stringing (Part 2: How to String a Spaghetti Racket)

The spaghetti stringing system had the potential to revolutionise the tennis racket industry. Its inventor, Werner Fischer, realised there was an opportunity to turn his unique system into a lucrative business and, prior to the ITF’s rule changes in 1978, filed several patents for iterations of the spaghetti system in an attempt to protect the rights to his invention.

Despite Fischer’s efforts, however, once spaghetti rackets emerged on the professional scene and began to make headlines, it was not long before ‘unofficial’ reproductions were seen at major tournaments. Various modifications and adaptations to the system were produced that resembled his original invention. The desired effects could be achieved with a conventional wood or metal tennis racket even if the pattern departed slightly from Fischer’s patented design, so long as the general principles were followed.

After the ITF’s ruling, however, the spaghetti stringing system immediately became obsolete, abruptly ending both its influence on the game and the media attention it received. Articles and publications written about the system in the late 1970s at the peak of its popularity are now difficult to source. There are, however, a few key publications available that shed light on the invention and how to replicate it.

Fischer’s first patent application, titled ‘Tennisschläger’ (DE2143255), was filed in Germany in 1971 and issued by the German Patent Office in 1977. The patent details the full double-sided stringing system intended for training purposes. In 1976, Fischer filed a second German patent (DE2634599) as an addition to his original application. The patent, issued in 1980, develops and improves the principles from his original patent. Fischer later submitted a corresponding patent application in the United States in May 1977 (US Patent 4190249), which was published in February 1980. 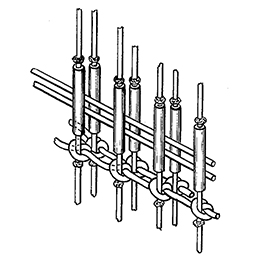 Werner Fischer also filed another German patent (DE2656082) in 1976 for an alternative stringing system. The patent, issued in 1980, references his earlier patent and contains further adaptations of the tubing arrangements, but for a simpler single-sided version of the system. Variations with short or continuous tubing sections on both the main and cross strings are included, in relation to a conventional tennis racket with a single plane of mains and a single, un-woven plane of crosses. The corresponding US Patent 4273331 was filed by Fischer in December 1977 and published in June 1981.

Although Fischer’s patents contain thorough explanations of the effects yielded by the spaghetti system and are accompanied by illustrative sketches, they do not clarify some of the technical considerations for stringing the system. Fortunately, there are other sources of information available that help explain some of these details.

An article published by the United States Racquet Stringers Association (USRSA) in The Stringer’s Assistant (November 1977), ‘How to string a double-strung racquet’, provides full instructions for a variation of the spaghetti system. The method is an interpretation of Fischer’s design that uses full width tubing on the crosses, with mains tubing only an optional addition. The crosses are only single-strung, unlike Fisher’s design where both the mains and crosses are double-strung. The instructions include suggestions for providing a rougher surface and projections for even more ‘bite’ on the ball, by weaving leather, cloth or canvas strips, abrasive cord or even small gauge flexible barbed wire into the mains.

Another valuable source of information on the spaghetti racket is Siegfried Kuebler’s ‘Book of Tennis Rackets’. Originally published in German in 1995, this compendium of tennis rackets dating from the 16th century up to around 1990 is an indispensable reference work for any serious racket collector or enthusiast. The comprehensive 635-page amended and enlarged second edition published in 2000 was translated into English, however copies of this book are very scarce. The ‘Update 2010’ to the second edition, of which only 70 copies were printed, contains an entry on Werner Fischer’s company, Fischer Besaitungstechnik GmbH. The section includes the story of Fischer’s double-strung racket and describes the details of his US and German Patents, explaining the differences in the two patented systems.

To fully understand the purpose of the various components of the system and how to replicate them, it is also helpful to examine photos of original rackets strung by Fischer himself. Any attempt at recreating Fischer’s system can also be greatly informed by reading tips and anecdotal experiences from other stringers that have attempted the spaghetti method.

The instructions that follow are an amalgamation of the information available, for the full double-strung system that renders the racket effective on both sides. 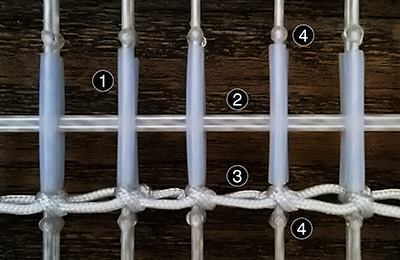 Fisher’s patent recommends that the mains are strung with either gut or nylon string. The mains are strung in a conventional manner, but instead of using one length of string, two equal lengths of string are cut. This effectively requires a whole set of string for installing the mains. The two lengths go side-by-side together as the mains are strung, creating two planes, or ‘strata’. Tension is pulled on both lengths together (known as ‘double-pulling’) and a single clamp is used to hold both lengths after each pull. In effect, the process it no different to stringing one main, except there is a second main along with it. It is important, however, to ensure that the two mains lay side by side and do not twist around each other. Around 60 lb tension is recommended for the mains.

When tying off the pair of mains, one length may need to tie off in one hole, with the other length in another hole. It is hard, if not impossible, to get four strings into a common hole with both lengths tied off on the same pair of anchor strings. When stringing is complete, it is advisable to put tape or a racket head protector over strings that protrude beyond the frame grooves.

The cylindrical sheaths, also referred to by Fischer as ‘guide members’, serve as a means of separation for the main strings and allow them to glide over the cross strings. The sheaths may be of any suitable, low friction material. Regular nylon or Teflon tennis racket tubing works well, or even plastic surgical tubing. The tubing should have an inner diameter corresponding to the outer diameter of the strings, such that it can spin freely on the string without a lot of room around it. In some variations, plastic tape or even plasters were used on each main instead of tubing.

The tubing should be cut into lengths at least equal to the main string spacing distance (1 inch is generally sufficient). A piece of tubing is required for each set of mains at each intersection, so for a racket with 18 pairs of mains and 5 crosses, the total number of tubes required is 18 x 2 x 5, which equals 180.

The tubing is placed onto the main strings during the stringing process. Before pulling tension, slip the lengths of tubing on each individual main string. Later, after putting in the crosses and before tying the holding strings (see below), slide each tube into position at a cross string intersection. The sheaths can then be affixed to the main strings using a suitable adhesive. By placing glue at one end of the tube, the glue will move by capillary action through the tube and will bond along its inner surface.

As with the mains, the crosses may be installed with a conventional racket string of standard composition and size. Depending on the particular racket and string pattern, spaghetti stringing generally uses 4 to 6 crosses, which are double-strung in the same way as the mains. This requires roughly half a set of string. As a general rule, the cross string pairs should have a regular spacing of three times the spacing of the main strings. In practice, this requires a cross every third hole, skipping two holes between each cross.

Fischer’s design permits either uniform tension for the cross and main strings in accordance with conventional practice, or different tension levels suiting individual preference. The cross strings are threaded between the two sets of mains, ensuring there are no weaves. The ends of the cross strings are then tied off wherever is convenient.

The holding strings are required in the central portion of the string bed (where it is intended for the ball to make contact) and run parallel to each cross. The holding strings connect the main strings together, such that if one or more main strings are laterally displaced on impact with the ball, the force is also transmitted to the other mains. This prevents substantial displacement of an individual string that would otherwise cause it to break.

Regular braided nylon string can be used, or any other strong, thin thread of string. Construction levelling string (also known as mason line) is a good option. Cheap twine may be easier to use. Some spaghetti systems use a lighter gauge racket string, fabric trimming cord or even stout fishing line.

According to Kuebler in the ‘Book of Tennis Rackets’, Werner Fisher claimed to have developed a special glue himself for creating the projections that was unmatched in performance. The glue supposedly did not come off during play, a significant feat given the notoriously difficult task of bonding adhesives to nylon’s slick surface.

Werner Fischer’s business associate, Gunter Harz, filed a patent application for his own modification of Fischer’s design in October 1981 (US Patent 4488722). The patent, which references both of Fischer’s earlier US patents, was published in December 1984 and features a similar double-strung system comprising two independent sets of main strings, but with some notable differences. 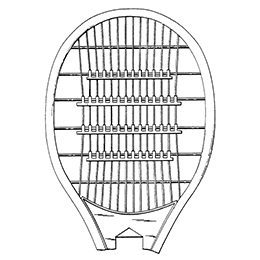 Rather than having several small sections of tubing combined with separate holding strings, the tubes of each row are instead connected together as a single piece moulded from rigid thermoplastic material, called a ‘spinner’. The spinners hold the tubes in the exact spacing and are glued to the main strings, with identical sets of spinners secured on each side of the racket. The advantage of the spinners was that they made spaghetti rackets both easier and quicker to string, as the holding strings could essentially be omitted.