Squash rackets manufactured by Prince often feature the signature ‘Power Ring’ – a patented design where all main strings wrap around an inverted ring in the throat. The Power Ring design has been replicated by other manufacturers including Tecnifibre, in the ‘Arch Power’ series of squash rackets, Wilson ‘Power Hinge’ rackets and also Karakal rackets with the ‘NEXGEN FF Core Bridge’. As the Power Ring and its near identical imitations do not use conventional grommets around the throat area, the stringing method used for these rackets is slightly unique.

The most important thing to remember when stringing Power Ring rackets is that the main strings should alternate high and low from one side of the string bed to the other. The ‘high’ mains go over the Power Ring, while the ‘low’ mains go under it.

Although there are some cases where Power Ring rackets can theoretically be strung in one piece (and in fact are commonly supplied factory strung in one piece), they are generally always strung in two pieces with four tie-off knots. The two-piece method is favoured as stringing in one piece can result in a long, unsightly run on the outside of the frame from the outer long side main up to the top cross, due to the outer mains of the ‘fan’ pattern finishing so low down the frame. The one-piece method may also result in three strings laying side-by-side on part of the frame, which may cause them to protrude above the groove of the grommet strip and make them more susceptible to damage from wall shots.

For a racket with 14 mains, starting the mains is straightforward. Start the centre mains loop around the Power Ring and pull tension against the ring on both centre mains towards the head. Clamp the centre mains in the usual way and proceed to the next mains.

The racket used in this example is a Prince Extender Triple Threat Ring with 16 mains. For a racket with 16 mains starting at the head, when putting the first two centre mains in place, make sure that one string goes under the Power Ring while the other goes over it. The centre mains are then tensioned towards the throat – this is the only time that pulling towards the throat is permissible for any Power Ring racket, as will shortly be explained. 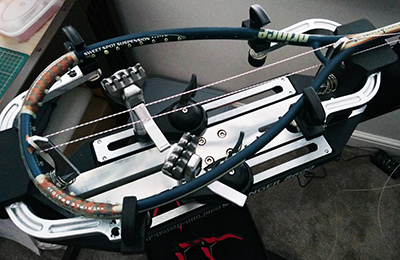 The first left main (LM1) goes underneath the ring, the first right main (RM1) goes over it.

After clamping the centre mains, rotate the racket around as from this point all tensioning is done at the head.

Once the centre mains are installed, all other mains must be tensioned and clamped at the head only. This is done by pulling the mains two at a time and is one of the rare cases when double-pulling is acceptable and, in this case, necessary. It is difficult to get the machine clamps in place at the throat and if mains are tensioned and clamped at the throat, this can also go against the manufacturer’s stringing instructions, thereby invalidating any warranty.

To install the mains, bring the string down from the head, wind around the Power Ring and return to the head forming the next main, before tensioning both mains together in a single pull. Note that when pulling two strings together, an increase in the reference tension by around 15% (3-4 lb) is required as effectively twice the amount of string is being put under tension. A long string is able to stretch more than a short string and must therefore be strung at a higher tension in order to obtain the same stiffness and performance characteristics. 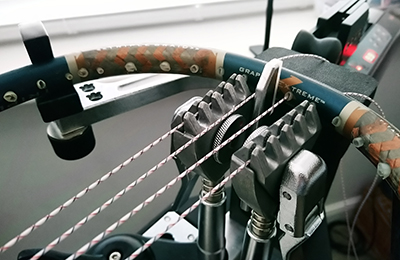 Clamp the main strings at the head after each double-pull.

Stringing the mains is a quick process as the racket does not need to be rotated around after each pull. When stringing the mains, however, remember to wind the string around the Power Ring the opposite way on the two sides of the racket. On one side, the string should go over and under, whereas on the other side it should go under and over. The left side mains should not be mirrored with the right side, as this will result in two high strings or low strings sitting next to each other. Take care to also ensure that the loops do not cross over each other at the Power Ring. Before tying off the mains, it is worth double-checking that the mains alternate high and low and wind around the Power Ring in the correct way. 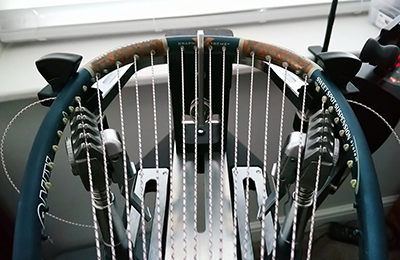 The finished mains, ready to tie off.

The crosses are strung in the conventional way, with a couple of additional considerations. The crosses are single-pulled, so make sure to reset the machine to the original reference tension before starting.

The crosses should be started at the head and should alternate between ‘hard’ and ‘soft’ weaves. A hard weave is where all the ‘high’ mains on top of the Power Ring go under the cross string and all the ‘low’ mains below the Power Ring come up over it. A soft weave is where the cross string simply threads between the high and low mains. It is important to ensure that the bottom cross is always installed with a hard weave, as this stops the cross string from floating between the high and low mains and avoids excessive vibration. The weave of the first (top) cross must therefore be correct to ensure a hard weave at the throat. If the total number of crosses is an odd number, start the first cross with a hard weave as this will be the same as the bottom cross. For an even number of crosses, start with a soft weave. 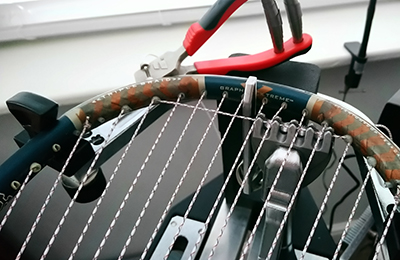 This Prince racket has an odd number of crosses, so the top cross is strung with a hard weave. 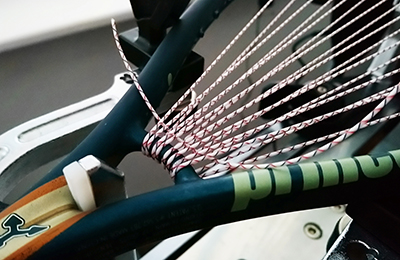 For soft weaves, thread the string through the gap at the Power Ring.

The height variance between the main strings can make stringing the hard weaves difficult, particularly for the crosses nearest the throat. To alleviate this, it is best not to use a ‘one ahead’ weaving approach, as it is useful to have the previous cross tensioned before weaving the next. This flattens the mains slightly, reducing the height variance and making it easier to weave.

Before weaving the last cross, cut off any excess string. The last cross is a particularly hard weave and is made much easier by not pulling unnecessary string through. It is also best to thread and pull the last cross one weave at a time, as this reduces friction burn on the string. 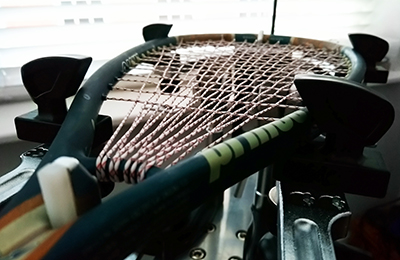 The strung racket, with a hard weave on the bottom cross.

After tying off and with the racket still in the machine, use an awl to straighten out and evenly space the main strings. If the 6 o'clock post was supported against the Power Ring, take the racket out of the machine and use the awl to close the gap on the Power Ring between the centre mains.

Some Prince rackets have double-barrelled grommets, where two string holes are combined within a single grommet to accommodate both a main and a cross string. The patented feature offers the same advantages as shared grommets in terms of improving frame strength, by reducing the number of drilled holes in the corners of the frame. The benefit of the double-barrelled grommet is in how it overcomes the difficulty of stringing shared grommets. 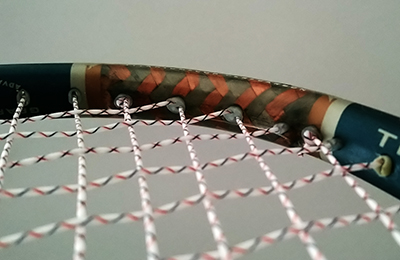 This Prince racket has three double-barrelled grommets at the head on each side.

To check which hole should be used in a double-barrelled grommet when stringing the mains, count the crosses up from the throat. For the number of the cross that shares the grommet, the table below shows which hole to use for the main string:

The same principle applies with shared grommets, although it is more difficult to ensure a hard weave while also ensuring that the strings lie parallel to each other on the outside of the frame. When stringing the crosses, use fingers to either lift or push down the main string occupying the shared grommet to help when feeding the cross string through.