Regular stringers of squash rackets will inevitably encounter rackets strung with a ‘fan’ pattern. Unlike traditional rackets where the main strings run parallel to one another, in a fan pattern the mains converge at the throat, with wider separation than normal between the main strings at the head. A number of manufacturers including Dunlop, Head and Mantis have utilised fan patterns in several generations of their racket models, most of which have an open throat or ‘teardrop’ shape frame. Fan patterns always start with the centre mains loop at the head and, in general, are best strung in two pieces (although there are some exceptions). 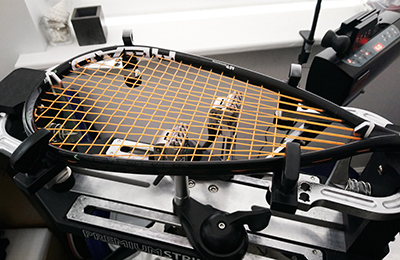 To avoid having several grommets in very close proximity at the throat (which would weaken the frame), fan pattern rackets normally have between three and five ‘shared’ grommets on either side that each contain two main strings. These shared grommets can cause a variety of problems for the uninitiated and without the manufacturer’s stringing instructions to hand, fan patterns can leave even an experienced stringer feeling slightly perplexed. It is surprisingly common to see fan pattern squash rackets strung to a poor standard – while the racket may still be usable, the string job can look messy and unprofessional. The most common mistakes are:

Knowing the potential problems before they occur and applying a little extra care and attention to detail during the stringing process make a real difference in giving fan pattern rackets a professional looking finish.

Tip 1: String the mains in the correct sequence

The first thing to note with fan pattern rackets is that the mains are not simply strung from the centre outwards sequentially. For example, although the patterns generally begin by installing the centre two mains (LM1 & RM1) as normal, rather than continuing to the second mains (LM2 & RM2), the pattern may require you to string the third mains (LM3 & RM3) instead, skipping the second grommets at the head before then taking you back to string the second mains.

Each fan pattern variation has its own specific sequence for installing the mains and designated locations for tie-offs (note: mains will never be tied off at a shared grommet). The common variations of fan pattern are explained later on. Regardless of the sequence, as with conventional rackets it is recommended to tighten two mains on one side, then two mains on the other side and so on. 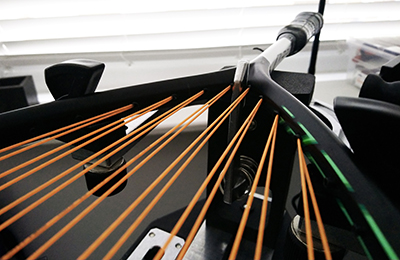 To ensure consistent top/bottom pairings, after stringing one main through a shared grommet, the second main must be pulled through on the correct side of the main already occupying the grommet. However, even with the greatest care, the shared grommets are often frustrating – once one string is under tension, passing the second string through the same grommet can be problematic. Either you’ll have trouble squeezing the second string through in the required top or bottom position, or the string will pass through deceptively easy, only for you to realise later on that it has actually crossed over the other main string within the grommet. It is very easy for the mains to wrap or twist around each other where they converge into a shared grommet; sometimes this twisting is not visible and can go unnoticed until it is too late to rectify. Trying to correct the twisting once the mains are under tension can make things worse and installing the next mains without addressing the issue produces unsightly string crossovers on the outside of the frame (when they should lie neatly parallel to each other).

Fortunately, there is a very simple but effective way to solve this problem – stringing ahead. This means loosely string four mains at a time each side before pulling any tension on the strings. In doing this, it becomes much easier to ensure strings pass through the correct parts of the shared grommets and the risk of twisting is minimised. When pulling tension on a string through a shared grommet, it can sometimes help to keep a finger pressing both strings against the inside of the grommet, to keep them in their correct positions. 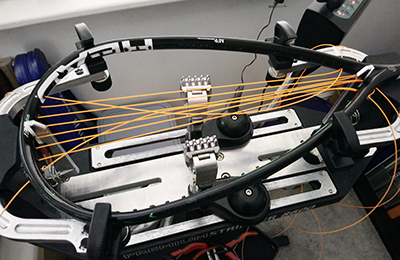 Thread the first four mains on each side through the shared grommets before applying any tension. 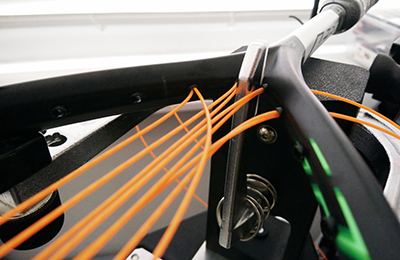 Without tension on the strings, it is much easier to pass strings through the shared grommets.

Be warned – with several strings threaded and a counter-intuitive sequence for tensioning them, it is very easy to clamp the wrong string after pulling tension. Take extra care to ensure the correct string is clamped, otherwise you risk losing tension in all the mains with no choice but to completely start over. 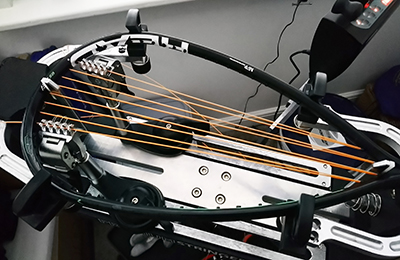 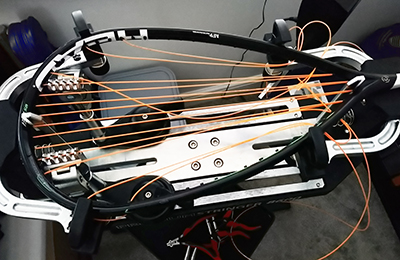 Thread the next three or four mains on each side through the remaining shared grommets.

It is important to have a ‘hard’ weave for the bottom cross, as opposed to a ‘soft’ weave. If you have ever strung a ‘Power Ring’ racket, these terms are likely to be familiar to you. The difference between hard and soft weaves is explained in another blog post. Fan pattern rackets adopt the same principle, whereby the bottom cross must go over all the ‘high’ mains, and under all the ‘low’ mains. 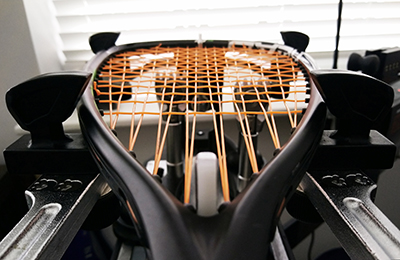 A correct ‘hard’ weave on the bottom cross.

There are a few common variations of fan pattern, each with their own unique sequence for stringing the mains. Fortunately, the standard patterns differ very little from manufacturer to manufacturer. The variations are as follows:


This pattern has 14 mains, 12 of which are strung through a total of 6 shared grommets at the throat. Only the outer mains occupy their own grommet. For most rackets with this pattern, a two-piece method is required with the mains simply tied off on the two outer mains (LM7 & RM7). 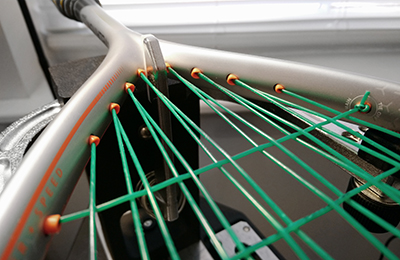 Dunlop Hyperfibre XT Revelation 135 with tie-off on the bottom cross.

Some Dunlop rackets with this pattern have directional strung frames that require a one-piece method and force the crosses to be strung from the bottom up (although not best practice, Dunlop allows this). The outer mains are often not in a grommet large enough for tie-offs, so the short side main is tied off on the bottom cross instead. This requires a starting clamp to be used on the last short side main while the first two crosses are strung, before moving a machine clamp back to the short side main and tying off.


This is the pattern type for the racket used as an example in the photos above: a Head racket with the Adaptive Fan Pattern (AFP) technology. The pattern has 16 mains, all of which are strung through a total of 8 shared grommets at the throat.

The Head racket is a directional strung frame and requires a two-piece method, although theoretically it can be done quite easily in one piece (as long as you select the correct side of the racket as the ‘long’ side). With Head rackets, the pattern is designed to make tying-off the mains slightly easier, by placing the tie-off points not on the outer mains (which are acutely angled to the inside of the frame) but closer to the head of the racket, on LM5 and RM5. To allow this, the pattern requires stringing the outer two mains before coming back in to pull the third-to-last mains and tying off.

With Prince rackets, the tie-off holes are generally located on LM7/RM7, as mains 5 & 6 often occupy shared grommets at the head that also contain cross strings (and therefore don't allow tie-offs). The mains sequence, however, remains the same.

Where the tie-off holes are located on LM6/RM6, mains 6 and 8 should be strung in the opposite order.

To determine which sequence to use with any Type B1 racket, just look for where the enlarged grommets or tie-off holes are located at the head.


This pattern is exactly the same as Type B1 (with tie-offs normally on LM7 & RM7), except the frame has a short bridge at the throat which accommodates the eight central mains.

Some Dunlop rackets may not have enough tie-off holes at the head to allow a two-piece stringing method, so require a one-piece method.


Some Head Adaptive Fan Pattern (AFP) rackets with a throat bridge require a slightly counter-intuitive stringing pattern. Type C rackets have an incredibly dense pattern with 18 mains, 16 of which are strung through a total of 8 shared grommets at the throat. Only the outer mains occupy their own grommet. The racket requires a two-piece method, tying-off the mains at the throat on the outer main strings.


This pattern, which again appears exclusively in Head AFP rackets, is very similar to the pattern for Type C rackets, but requires mains 8 and 10 to be strung in reverse in a similar way to Type B1, such that the tie-offs can be done closer to the centre of the head (on LM6 and RM6).