Through the history of professional racket sports, players have explored the limitations of what both racket and string technology at the time were able to offer. String tensions among the elite players have varied considerably, often to bizarre extremes intended to suit their particular playing style, exploit the latest in material development or simply give them the competitive edge over their opponents.

Tennis requires the highest string tensions of all major racket sports. It also has the largest effective tension range, meaning there is generally more variance between the setups of individual players.

In the 1970s, Björn Borg famously had his Donnay wooden rackets strung with natural gut tensioned above 80 lbs. This commonly resulted in string breakages even when the rackets were not in use, and was also known to cause spontaneously imploding frames. Compare Borg’s string tension with that of his rival, John McEnroe, whose Dunlop Maxply wooden rackets were strung (like for most players of the day) in the low to mid 50 lbs range.

The high tension was intended to give Borg as much control over the ball as possible. Borg’s rackets were customised by Donnay to his strict specifications of weight, length, balance and even wood quality, the frames reinforced by adding an additional ply of wood to cope with the extreme string tension. Such was the severity of the tension, Borg allegedly broke strings in 52 rackets on route to his sixth French Open title in 1981. During tournaments, he would also supposedly give all the rackets to his coach overnight so that if and when they snapped, it was the coach’s sleep that was disturbed and not his.

By the 1980s, wooden rackets were becoming obsolete and manufacturers were switching to graphite and composite frames, which were lighter and stiffer. The modern frames made possible string tensions that were almost double those that were used with wooden rackets. But even with the advancement in racket technology, the typical tension for natural gut and synthetic strings did not increase dramatically and remained around 60 lbs.

Although most players were content with traditional tensions, with new technological capabilities came new players look to push the limits of what racket and string performance could offer. Players from the modern era, such as Pete Sampras, Andy Roddick, Tommy Haas and Mark Philippoussis, have all played with rackets strung above 70 lbs. Dustin Brown, the Jamaican-German player known for his entertaining playing style, supposedly asks for a staggering 79 lbs. But none of the players from recent decades quite compare with Monica Seles, former world No.1 and nine-times Grand Slam winner, who would have her Yonex rackets strung at an incredible 92 lbs – higher than most stringing machines were capable of at the time.

At the other end of the scale, Americans Bethany Mattek-Sands and Jack Sock have had their rackets strung at 38 lbs and 35 lbs respectively, while Kazakhstani player Mikhail Kukushkin has his rackets strung at around 32 lbs. Filippo Volandri, the Italian clay court specialist, was famous for his preference for low tensions, which were reported to be as low as 26 lbs. But the record for the lowest tension on the professional circuit must surely go to veteran Canadian doubles player Daniel Nestor, who purportedly has had his rackets strung as low as 11 lbs with a hybrid setup of natural gut and co-polymer monofilament. At such an astonishingly low tension, it would be theoretically possible to string a racket by pulling the strings by hand, were it not for the loss of accuracy.

But perhaps the most notable user of low string tension is multiple grand slam winner Roger Federer, who has his rackets strung with a natural gut / polyester hybrid setup in the mid-40s. In fact, with the exceptions like Dustin Brown, many professional players are now using tensions well below 60 lbs. The recent drop in tensions is likely attributable to the advent of polyester strings in the 1990s and subsequent growing popularity to this day.

At traditional tensions, polyester strings create a very stiff string bed, which can lead to players developing wrist injuries and severe cases of tennis elbow. Extremely high tensions, particularly with high performance polyesters, are also difficult to master and are not generally recommended for the average club player. Even the professional players are now lowering their tensions in order to get the best performance from their poly-based strings – the average string tension on the professional tour has dropped to around 50-52 lbs for the men and a few pounds higher for the ladies. 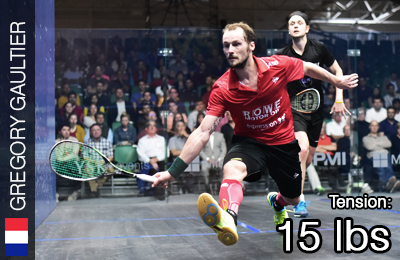 Gaultier is known for customising his rackets, even having the head of the frame shaved to remove some of the material and make the balance as head-light as possible. But more notable is his preference on string tension. In the past, Gaultier’s rackets have been strung at an extremely low tension – as low as 15 lbs, nearly half that of his fellow professionals. The result is a phenomenal generation of power.

Speaking with Squash Player Magazine about a win over Daryl Selby in the 2013 World Championships in 20131, top UK stringer Liam Nolan described Selby’s experience playing against a 15 lbs racket wielded by Gaultier:

"Daryl was having problems straight away. The ball was going so fast he couldn’t actually see it. He could hear it though!"

Although common to drop the string tension slightly for a cold court, the average squash player would struggle to benefit from such a considerable change. The ball goes much deeper into the string bed, spending longer in contact with the strings. As a rule, the longer the ball stays on the strings, the less ball control you will have – touch and precision are all but lost. Only an extremely high level of skill, possessed by the likes of Gaultier, can regain pin-point control over shot placement.

The development in badminton racket technology has produced lighter and yet stronger frames, generating a significant amount of testing by international players looking for a competitive advantage. String tensions are being pushed higher and are now entering (if not going beyond) the range normally associated with squash rackets, which are significantly thicker and heavier than badminton rackets and therefore designed to better withstand high tensions.

In recent years, the most extreme tensions seen on the professional circuit are likely those used by Indonesian singles player Taufik Hidayat, who had his rackets strung at around 35 lbs, and retired Danish former world No. 1 Peter Gade, who is known to have gone as high as 36 lbs. Regarding their preference for high tension, Gade and Hidayat believed this enabled them to play faster and that a low tension not only lost them control of the shuttle, but also power.

"From my point of view, if the tension is too low, I feel less control and power. We want to take control of the shuttle as much as we can." – Peter Gade, speaking with Yonex in 2015.2

Men’s singles player Viktor Axelsen, also from Denmark, is perhaps using the highest tension currently on the professional tour – up to 34 lbs. In fact, it appears many current professional players are comfortable with having their racket string tension set between 30 and 34 lbs. This is particularly true of players from Europe and Indonesia. However, at this tension, only a powerful wrist can generate the power required to compete at the elite level of the game.

In order to achieve maximum performance, these professional players risk breaking their rackets as it is quite common for the tensions to exceed the frame’s limitations. With sponsorship, players can afford to do so but for the average recreational player it is not advisable to exceed the maximum string tension as printed on the racket. Whilst stringers may agree to string a racket beyond the manufacturers recommended tension, it can be expected for them to stipulate that they will not be responsible if the frame breaks. 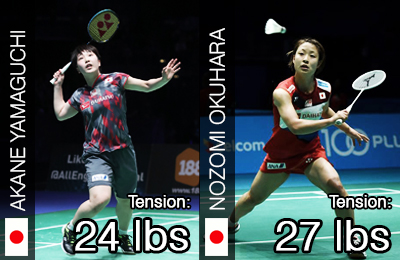 Among the elite players in both the men’s and women’s game, there are now very few exceptions to those using 30+ lbs tension. Typically, it is only the Japanese players that prefer a lower tension as this can suit their style of play. In Japan, shuttle speeds are slower compared with Southeast Asia due to the colder climate, meaning hitting to the back of the court is more difficult. Dropping string tension can be an effective way to compensate. Akane Yamaguchi, for example, is believed to have had her rackets strung at 24 lbs, while compatriot Nozomi Okuhara typically plays with a tension of 27 lbs.