The Blackburne DS 107 tennis racket incorporates a unique ‘double-strung’ design where two sets of strings, or string beds, lie either side of the frame. The racket was designed by Robin Blackburne, a British wine merchant and inventor residing in Bermuda, and was developed over 20 years by Blackburne Advanced Racquet Systems. 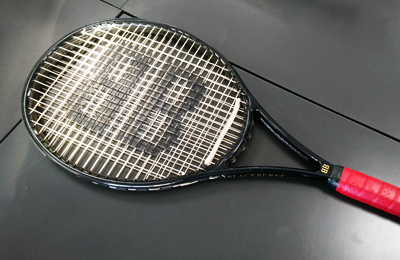 The Blackburne double-strung racket went through many stages of evolution, involving the use of computer aided design (CAD) and several prototypes produced in wood, aluminium, steel, fibreglass, Kevlar and finally graphite. Due to the high loading on the frame caused by the additional string bed, many early prototypes imploded after stringing before a single ball had been hit. The double-strung system also requires twice the number of grommet holes of a conventional racket, which caused further complications during development due to them being situated at the very edge of the frame. The research team required the services of two former NASA physicists and experimentation with around thirty different layering techniques of high-modulus graphite set in aero-space resin, before finally achieving the stiffness and strength required.

The DS 107 is fractionally head-heavy and with a head size of 107 square inches, falls between a mid plus and small oversize racket (hence the name Super-Mid). A later model, the DS 97, has a smaller mid-size frame of 97 square inches and is targeted at more advanced club/tournament players. 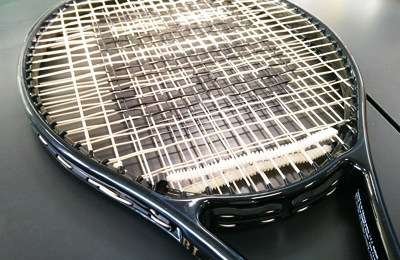 The racket is supplied with ‘caterpillar’ design vibration dampers fitted to both string beds, below the bottom cross strings

The Blackburne's main selling point, iterated by the slogan "It gives you the edge – because it has no edge", is its claim of eliminating off-centre frame shots and mis-hits. The design achieves this by presenting a plane of strings to the ball with no frame protruding, thereby increasing the effective hitting area compared with a conventional racket of the same frame size. Shots can be hit with heavy top spin (or back-spin) without catching the racket's trailing edge. 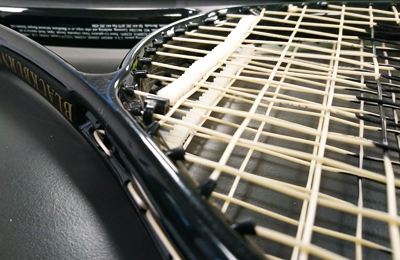 Very little of the frame edge protrudes, minimising the likelihood of mis-hits

Restringing a Blackburne double-strung racket is a unique process. The racket requires twice as much string as a conventional racket and typically requires twice the amount of time to re-string. Although each side is strung independently using normal stringing techniques (a one-piece method is recommended), complications inevitably arise when stinging the second bed.

The manufacturer advises the lower string bed to be strung first using the machine clamps, before stringing the upper string bed using floating (flying) clamps. Because the use of floating clamps may cause slight tension loss during stringing, Blackburne suggests that the tension for the second side is set a pound or two higher to compensate for this.

Weaving the crosses on the second (upper) side can be a challenge, as the lower string bed obstructs getting fingers under the upper strung mains. For the first 10 to 12 crosses, weaving is relatively straightforward as the main strings can be parted slightly sideways to allow fingers through from above. However, for the last four to six crosses, Blackburne recommends using the concave shape of an ordinary teaspoon, slid underneath the main, to catch the cross string and bring it back upwards for the next weave.

Alternatively, the Blackburne can be strung without the use of flying clamps by stringing the upper bed first and then, leaving the racquet in the machine, the lower set is strung. However, on some stringing machines the clamps may not be tall enough to reach the top string bed. 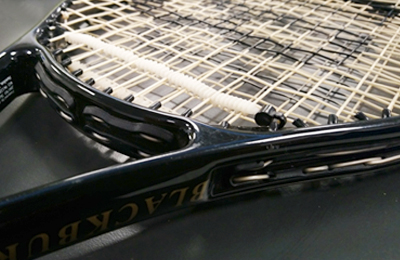 The Blackburne double-strung racket was initially outlawed by the International Tennis Federation (ITF) for nearly ten years. After appeal, the ITF eventually conceded that the racket did not contravene their rules and in 1995 it was approved for ITF and USTA sanctioned play by both amateurs and professionals. The racket is still being manufactured today, but as it is hand-crafted is only available in limited quantities – only a few hundred rackets can be produced a month. It has been endorsed by American singles player Roscoe Tanner, former world No. 4 and 1977 Australian Open winner, with around 15,000 rackets sold worldwide.